More than 50,000 Americans died from drug overdoses last year, the highest figure ever.

The tally has been pushed to new heights by soaring abuse of heroin and prescription painkillers, especially fentanyl.

Heroin deaths rose 23 per cent in a year, to 12,989, slightly higher than the number of gun homicides, according to government data released yesterday.

The total number of gun deaths – which included suicides and accidents – rose seven per cent to 36,252.

It comes only days after another report which showed fentanyl, a synthetic opiate which is 40 times stronger than heroin, has become the largest drug threat to the United States, and causes 44 deaths every day. 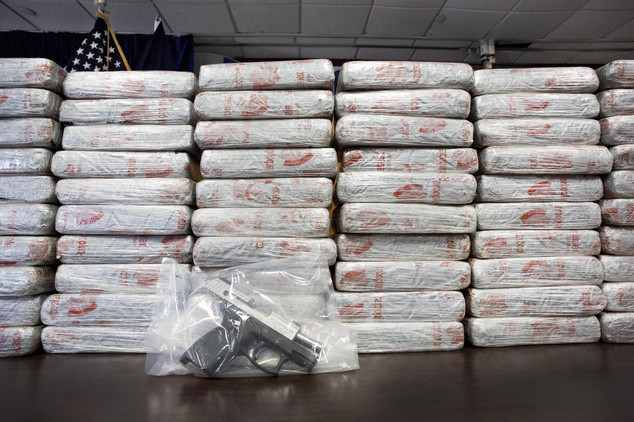 Which is more deadly? A gun is pictured next to 154 pounds of heroin worth $50million which were recovered by police in New York last year. More people died from heroin overdoses than by gunshot wounds last year

Overdoses – often accidental – of Oxycontin and Vicodin killed 17,536, an increase of four per cent.

‘I don’t think we’ve ever seen anything like this. Certainly not in modern times,’ said Robert Anderson, who oversees death statistics at the Centers for Disease Control and Prevention. 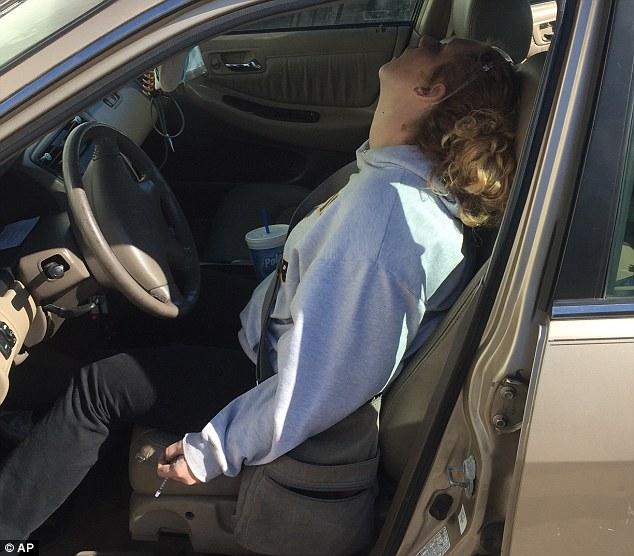 In October this year Erika Hurt was pictured in the driver’s seat of her car, with a syringe hanging out of her arm, as her 10-month-old son cried in the back seat. She recovered and was later arrested

The ‘war on drugs’ was a term coined by the press in 1971 after President Richard Nixon held a press conference to publicize the growing menace of narcotics flooding the country.

In July 1973 the Drugs Enforcement Administration (DEA) was set up in a bid to combat drug smugglers and pushers.

In the 1980s crack – a highly addictive form of cocaine – created a new generation of drug addicts but deaths began to fall in the 1990s.

But they have been rising steadily since 2001 and heroin in particular has seen a massive spike in the last six years. 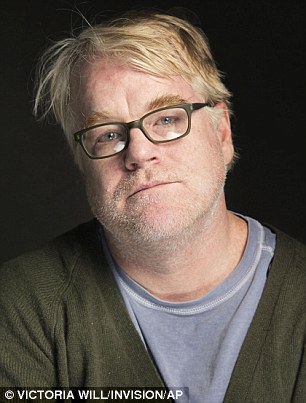 In February 2014 Hollywood actor Philip Seymour Hoffman (left) died of a heroin overdose at his apartment in Manhattan. But most drug deaths are low profile and rarely make the news

In February 2014 heroin claimed the life of Hollywood actor Philip Seymour Hoffman, who overdosed in the bathroom of his apartment in Manhattan.

But the vast majority of those being killed by heroin and fentanyl are ordinary people in smalltown America.

Statista.com compiled a table comparing drug deaths state by state and it showed that West Virginia was the drug death capital of America with 32.4 per 100,000 people, almost three times the national average. Another Appalachian state, Kentucky, was third on the list.

But opiates are ravaging the entire country and almost every day there are stories and photographs of horrific incidents.

Last week Amanda Riley, (left), allegedly injected herself with heroin in the bathroom of a gas station in Sarasota, Florida as a four-year-old child watched on. She survived

Last Friday Amanda Riley, 30, allegedly overdosed on heroin in the bathroom of a gas station in Sarasota, Florida, while a four-year-old child watched. She survived and has since been charged with child neglect.

In September this year a photograph showing a couple unconscious in the front of their car, while their child sat in the back, went viral with people suggesting it looked like something from a zombie film.

The ‘zombies’ were Rhonda Pasek – the boy’s grandmother – and her boyfriend James Acord, who were off their heads on heroin. The pair, from East Liverpool, Ohio, have since been sentenced to jail time.

And in October a 25-year-old woman, Erika Hurt, was pictured lying in the driver’s seat of her car with a syringe hanging out of her arm. Her 10-month-old son was crying in the backseat.

In the same month more than a million people watched a video posted on Facebook in Memphis, Tennessee, of a couple collapsed in the street after taking heroin. 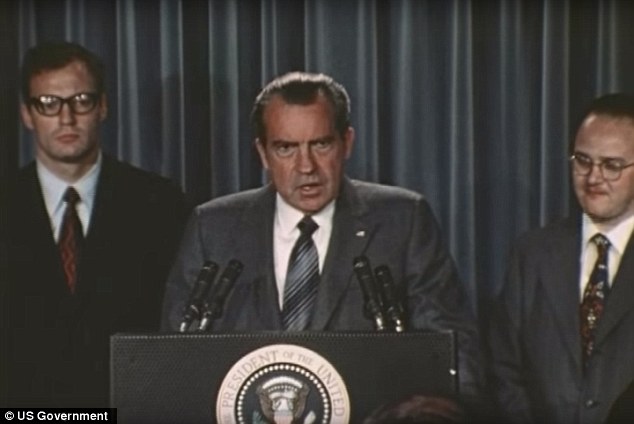 In June 1971 President Richard Nixon (pictured) announced that narcotics had become ‘enemy number one’ in the United States. It was the start of the ‘war on drugs’

The new numbers were part of the agency’s annual tally of deaths and death rates in 2015.

By comparison, the number of people who died in car crashes was 37,757, an increase of 12 per cent.